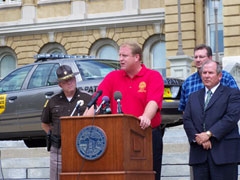 Iowa Governor Chet Culver announced Tuesday that Iowa State Patrol will eventually replace all its vehicles with ones that can run on a mix of gasoline that’s 85-percent ethanol.

“There is no more visible or widely know symbol of state government in our communities and on our highways than an Iowa State Patrol car,” Culver says, “and here in Iowa, where renewable energy has transformed our state, it is only fitting that these vehicles run on clean burning, Iowa grown, ethanol and ethanol-eighty-five.”

Culver says there are now 10 E-85 vehicles in the State Patrol fleet, with another 119 on order. Culver says the move to E-85 follows his executive order to increase the use of the corn-based fuel in all state vehicles. He says the order sets a use level of flex-fuel vehicles of 65-percent by 2009.

Public Safety Commissioner Gene Meyer says the old patrol cars will be replaced with the new flex-fuel cars as they are taken out of the fleet. Meyer says they generally take the vehicles off the road when they hit 95,000 miles, and the 119 vehicles on order will replace the old vehicles. Meyer says the patrol has a total fleet of 725 vehicles.

There are just over 70 gas stations that carry E-85 in the state, and Meyer says the goal is to use that fuel whenever possible. He says troopers will get a list of E-85 stations, and purchase the fuel when it is available. Meyer isn’t sure if there are areas of the state where the E-85 fuel won’t be available.

Meyer says he’s sure the availability of the fuel varies based on the population base of the area, but says he’s confident “E-85 will be available in most cases.” Meyer says the flex-fuel Fords the patrol uses cost the same as a regular vehicle. The governor and commissioner showed off the first flex-fuel patrol car during their announcement on the steps of the state capitol.