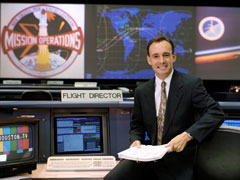 The next generation of American spaceships that will take astronauts back to the moon and eventually to Mars is still on the drawing board — and a man with Iowa roots is overseeing the whole project. Forty-six-year-old Jeff Hanley is manager of NASA’s Constellation program.

Hanley now lives in Houston, Texas, but grew up in the Quad Cities. He recalls being an eight-year-old boy in Bettendorf, enjoying a summer day in July when he first learned of Apollo 11 touching down in the moon’s Sea of Tranquillity.

Hanley says: “I was at the community pool with my mother and remember hearing over the loudspeakers that Armstrong and Aldrin had landed and I was just captivated by that. We went home that night and watched the moonwalk on TV and I have vivid memories of all that. That was kind of the point at which I got the fire in my heart for this business that I’m in.”

Hanley, who attended Iowa State University to study aerospace engineering, says the current space shuttle fleet will be replaced by a new type of craft, called Orion, which has many similarities to the series of Apollo ships that put 12 American men on the moon in the 1960s and ’70s.

Hanley says “While the outer shape of it might look familiar in terms of being a capsule, the inside, under the skin, it will be a modern system. We are going to be using modern avionics, which is basically the computers and other smarts in the spacecraft, we’re going to be using up-to-date life support systems and materials to manufacture this new system.”

The shuttle fleet was originally envisioned as being much more user-friendly, with launches perhaps weekly. Several factors, including the catastrophic losses of Challenger and Columbia, have forced the space program to dramatically slow its once-ambitious launch pace. 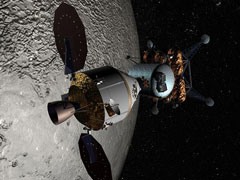 Hanley says ships and rockets that are part of the Constellation program are being designed to be streamlined, built from time-tested designs but with advanced technology from the new millennium. Another difference, the Orion capsule will be able to carry up to six astronauts, that’s twice the crew of Apollo.

Hanley says, “We’re intent on making it much more operable, much more easy to process and put together and stack it down at the Cape and launch and fly. (We’re) trying to take all the great lessons that we’ve learned through these last 40 years of human spaceflight and apply them to this new system.”

He says the shuttle fleet is scheduled to be retired in a few years, about the time Constellation is ready to blast off the launch pad. Hanley says, “Our current program schedule actually has us flying the first crewed flight of the Orion system in 2013 and gets us back to the moon, with boots on the moon, in the middle of 2019.”

It’s been three-and-a-half decades since astronauts were on the moon, so he says it’s natural that we return there first, essentially for a refresher course, before making the next “giant leap” toward Mars. Hanley says “One of the key reasons why we are returning to the moon is so that we can learn to essentially live off the land, we can hone our techniques and our systems so that when we do take that step, to go to Mars, that it’s a step we can take confidently.”

The tentative plan calls for Constellation to carry the first humans to the Red Planet in the year 2030. He says the scientists who are running the current robotic mission on Mars lament that living, breathing astronauts aren’t there instead. Hanley says, “If only they were able to put a geologist down on the Martian surface, a geologist would be able to complete some of the investigations that the Mars rovers have been doing over a span of months, a geologist could probably complete those in a matter of hours or days.”

Hanley says he looks to the future with vigor and optimism, as he strives to lead the U.S. space program to new heights and great distances, with the ultimate goal being the monumental achievement of the first human exploration of another planet.