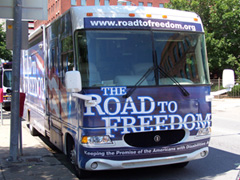 A nationwide bus tour touting the "Americans With Disabilities Act" is visiting Iowa. During a stop in downtown Des Moines, Jim Ward, the president of A-D-A Watch, talked about the " Road to Freedom Tour ." He says the road to freedom is a year-long cross-country journey promoting the rights of people with disabilities.

"And really the purpose is to make America aware of the people’s moment that went into the passage of the A-D-A in 1990," Ward says, "to also make people aware that the A-D-A is being weakened in the courts and to give them something to do, to sign a petition calling on Congress to pass the A-D-A restoration act."

Ward says the tour is getting close to an end. He says they left Washington, D.C. in November of last year and will be on the road until November of this year. Ward says they’ve traveled over 14,000 miles to 32 states. Ward says the stop in Iowa is especially important, as it’s the home of Senator Tom Harkin.

Ward says Harkin is a "special person to the disability community," as he says Harkin worked so hard to write and get the A-D-A passed. Ward is hoping the tour spurs Americans to push for a renewal of the A-D-A.

Ward says they hope people will sign the petition to restore the A-D-A, "so that people with disabilities can have equal access to the American dream, and really created an America that Congress intended when the A-D-A was passed in 1990." The tour includes a photo display of the events leading up to the passage of the A-D-A.