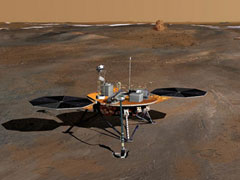 Three Iowa City students are getting a rare opportunity to hunt for life on Mars. A University of Iowa graduate student will lead the team, along with two Iowa City City High schoolers, as part of NASA’s latest robotic mission.

Juan Diaz, who’s pursing his doctorate in science education at the U-of-I, says they’ll go to Arizona next summer to help scientists on the Phoenix Mars Lander Mission. Diaz says the Phoenix spacecraft was launched earlier this month and is due on Mars in May of 2008.

Diaz says, "Basically, what we’re going to do is work with one part of the instrumentation, called MECA." An arm on the spacecraft will extend down to the Martian ice and soil, scoop up samples and then analyze them with MECA — which stands for microscopy, electrochemistry and conductivity analyzer. It’s one of the seven instruments aboard the deck of Phoenix.

Diaz says the spacecraft is destined for a particular section of Mars that’s still largely unexplored, an area they hope will hold frozen clues about possible life on the Red Planet. He says: "The weird thing is, it’s in the North Pole, close to the permafrost. We’re looking for life, any kind. It’s pretty exciting."

By dissolving small amounts of soil in water, MECA will be used to determine the p-H, amounts of minerals like magnesium, chloride and bromide, as well as dissolved oxygen and carbon dioxide. Diaz has master’s degrees in physics and astronomy and is working with City High students Tomas Daly and Fletcher Bates. They were among 13 student/teacher teams nationwide chosen to take part in the Phoenix mission and are the only team from Iowa.

Diaz says it’s thrilling to be taking part in a project that could help unlock some of the mysteries of our solar system He says: "I hope we find something. I’m sure we’re not alone in the universe. Life can be in any kind of form. It doesn’t have to be little, green men, or something like that, so I hope we find something interesting." The 40-year-old Diaz was a university physics professor in Puerto Rico before coming to the U-of-I to further his education.