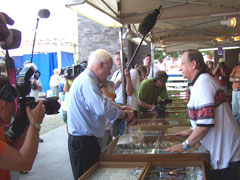 Republican presidential candidate John McCain was in Iowa for a few hours Tuesday afternoon to visit the Iowa State Fair.

"It’s hotter than this in Phoenix today, but it’s a dry heat," McCain said to a crowd of about 80 gathered to listen to him speak from the Des Moines Register’s "Soapbox" on the fairgrounds. (photo: McCain visits booth at Iowa State Fair)

McCain, an Arizona Senator, made joke after joke about the pork on display in Des Moines. "Paid a visit to the world’s largest boar — Big Red — who weighs 1203 pounds and I was very impressed," McCain said. "It reminded me of our need to eliminate pork barrel spending in Washington."

Earlier this week McCain dismissed Saturday’s Iowa GOP Straw Poll results as meaningless. McCain finished next to last with 101 votes. But while on Iowa soil, McCain refrained from criticizing the event, although McCain turned away from a fair-goer who questioned why he skipped the event.  Later, in his "Soapbox" speech, McCain made it clear he’s not skipping Iowa’s Caucuses as he did in 2000.

"We look forward to taking part in the (Iowa) Caucuses and I hope everybody no matter what party they are will turn out to vote since that will be one of the key elements in the selection of the next president of the United States," McCain said.

McCain, a skin cancer survivor who insisted on standing in the shade as he spoke, took questions from the State Fair crowd. The last was about illegal immigration."I knew I should have cut this off," McCain said, to laughter from the crowd. "…We have to secure the borders and I believe that the state governors on the border states have to certify the borders are secured, then we have to have a temporary worker program and we have to address the issue of people that are here illegally."

Next up on the State Fair "Soapbox" was one of those border governors, New Mexico’s Bill Richardson. Richardson, a Democratic presidential candidate who drew a crowd three times as large as McCain’s, was asked about illegal immigration, too. 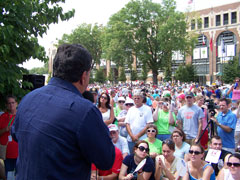 Richardson called for tighter border security by hiring more border agents and using technology to track border crossings rather than construction of a fence."Those that knowingly hire illegal workers should be punished, but let’s not…demonize (illegal immigrants). Many of ’em just simply want to come to America to improve the lives of themselves and their families," Richardson said.

Richardson opened his State Fair speech by directly criticizing other states which are hoping to displace Iowa Caucuses as the lead-off event of the presidential campaign. "Iowa should make the decision on who’s the next president — not the smarty-pants set in Washington, not those other states that want to come before you," Richardson said.

Richardson wore a long-sleeved navy shirt in Tuesday’s sweltering heat."I like to sweat. I like people to know I’m sweating. I like the physical side of campaigning," Richardson said. "…The way I’m going to win Iowa is by shaking hundreds and hundreds of thousands of hands."

Both Richardson and McCain were speaking as another event was underway nearby. The crowd around the State Fair Outhouse Race was larger than the crowd either candidate attracted for his speech.