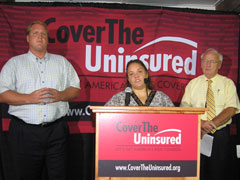 Governor Chet Culver is urging Iowans to call on Congress and the President to reauthorize the State Children’s Health Insurance Program. He spoke at a press conference today at the Iowa State Fair. The program, which provides insurance to families that don’t qualify for coverage under Medicare, is set to expire at the end of September.

Culver wants President Bush to approve the Senate bill, which would expand the program by 35 billion dollars. The bill is backed by Iowa Senators Chuck Grassley and Tom Harkin, but Bush has threatened to veto the bill in favor of his plan of 5 billion dollars. Government data shows the program provided health insurance to 6.6 million children last year, while 9 million remain uninsured.

"This is just common sense," Culver says of expanding the program, "who is not for covering nine million kids? Who is not for allowing Iowa to be the first state in the nation to cover every child? I want to continue to lead the state forward on this important issue, but we need the federal government to help us do that." Culver says if the program is expanded by just five billion dollars, as the president suggests, it may force some states to reduce the number of kids they can insure.

The Governor admits that probably would not happen in Iowa. Culver says, while a program reduction isn’t likely in Iowa under Bush’s plan, Americans have "spoken loudly and clearly" on the issue and the majority of Washington lawmakers support at least a 35 billion dollar expansion. In Iowa, the children’s health insurance program is called "HAWK-I."

Knoxville resident Marci Ruff spoke at the news conference about how HAWK-I has helped her afford medical care for her two children. Her 11 year old daughter Jensi struggled in school because of an eye condition that caused severe headaches. Ruff says HAWK-I allowed Jensi to get treatment, and now her headaches are gone, her grades have improved, and as Ruff puts it, "she’s a totally different child." Ruff says she hopes more Iowa families, that are eligible for HAWK-I, take advantage of the program.

"Words that I have to use for how it’s benefited my family are tremendous, thankful, and grateful," Ruff says, "and I also feel that we live in the greatest country in the world and I believe that all children of hard working Americans…their health care should be a right, not a privilege." State officials say the HAWK-I program provides health care insurance to 50,000 Iowa children.