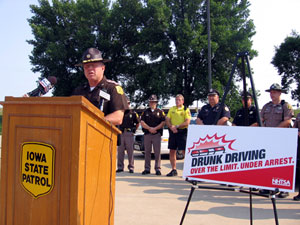 Law enforcement officers plan to be busy as the last holiday of the summer approaches.  Iowa State Patrol Colonel Robert Garrison says there are additional troopers on the roads now and the increased presence will continue through the Labor Day weekend. He says the main focus will be on drunk drivers.

Iowa ranks second in the nation, behind Utah, for the lowest percentage of fatal crashes that involve alcohol. "But that still added up to 101 people dying last year on Iowa highways because of alcohol related crashes," Garrison says.

The state patrol will pay special attention to certain areas of Iowa and use a variety of tools to catch motorists disobeying traffic laws.  "We’ll watch the vacation spots, the places you’d see lots of tourists," Garrison says, "and of course, we’ll have our aircraft up over the weekends. We’ll keep them busy to monitor the speeds from up there."

Garrison says, overall, there have been about 20 more traffic fatalities in Iowa this year – compared to this time in 2006.