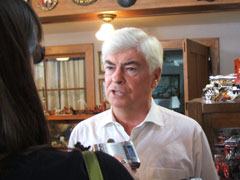 “We need to be doing what we can…to provide relief for people who are going to loose their homes. I mean, people are saying, ‘is this a deep crisis of not?’ If it’s your home, it’s a deep crisis,” Dodd says. “…That’s what’s happening or could happen to as many as two million homes in this country and that ripple effect across the economy could (do) real negative damage to our country.”

Dodd, who is chairman of the Senate Banking Committee, will meet tomorrow with the treasury secretary and the chairman of the Federal Reserve. “The Fed dropped the ball entirely,” Dodd says. “They had a responsibility here they did not fulfill.”

Dodd cites a 1994 law that he says required the Federal Reserve to protect consumers from fraudulent and deceptive behavior from mortgage lenders.  According to Dodd, the Federal Reserve and other federal officials are now moving to try to stop the damage.  “But more needs to be done with brokers and the credit rating agencies, in my view,” Dodd says.

Fannie Mae and Freddie Mac are quasi-governmental agencies which provide money to banks and other lenders that extend home loans. Dodd wants the president and the treasury secretary to order those agencies to dramatically expand the number of mortgage loans they’re backing.

“I’m worried that their resistance to doing that is going to cause this problem to be deeper,” Dodd says.  Stock markets around the world have dropped after U.S. mortgage companies announced steep losses on higher-interest loans made to borrowers with poor credit histories who’ve wound up defaulting on their loans.

Dodd, by the way, is the only presidential candidate campaigning in Iowa today.