You are here: Home / Fires/Accidents/Disasters / Flooding washes out roads in Union County 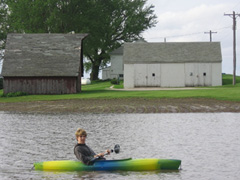 Several Union County roads have been damaged by flooding. County engineer Scott Nixon says it’s widespread. Nixon says there are a lot of areas where the water came up through the night and washed rock off the roads, and the water has gone back down.

Nixon says drivers need to be careful when driving in those areas. He says the water washed the gravel off the roads and they could be rough, and there are areas where the sides of the roads have been washed away. “Just because there’s not water over the road doesn’t mean it’s not hazardous,” Nixon says. Nixon says it’s going to take time to get the roads back in shape.

Nixon says once the rock has been washed into the ditch, they can get some of it back, but often there’s debris mixed in and they can’t re-use the rock, and have to bring new rock in. Nixon says it could take some time to get thins back in shape if there is more rain.