You are here: Home / Human Interest / Iowans heading back to Gulf Coast to help with hurricane relief 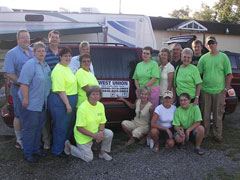 This week marks two years since Hurricane Katrina hit the Gulf Coast and a church group from western Iowa has just returned from its fifth trip to the region to help residents rebuild their homes — and lives.

Pastor Arley Ellingson of Onawa and his team have torn down mold-covered walls in homes across southern Mississippi, while tackling tasks from painting new walls to rebuilding bathrooms, bedrooms and kitchens. What do the volunteers get in exchange for the hard labor?

Ellingson says: "A hug from a family member down there or a ‘thank you’ or the wonderful hospitality that’s there, somebody smiling and saying, ‘Man, I can finally get back into my home after two years.’ Those are the real rewards." Ellingson serves as pastor of Methodist churches both in Onawa and Turin, while his wife, Peggy, is also a minister, serving two other Iowa churches — in Melbourne and Hinton. They’ve led five teams from Iowa to the Gulf Coast and have learned all sorts of things about home construction — and home destruction. (Ellingsons are at far left of photo)

Ellingson says:"Initially, we did a lot of what’s called mucking out, basically cleaning the houses out and tearing down the wallboards. We’ve also had the privilege of constructing houses, we do finishing trim around windows. We’ve done just about anything." He says everyone has something to contribute on a mission trip like this, from teenagers to people in their 80s, even if they have very limited skills with power tools and have never watched an episode of "This Old House."

Ellingson says:"There’s a wonderful, wonderful feeling of being able to assist people who are in dire need. To go down there and then bring that message back that this is an ongoing project so that other people will get excited about it, and if not doing mission work there, perhaps somewhere else." He says there’s a wide misconception that everything’s "back to normal" in southern Mississippi and Louisiana. He says the destruction was so widespread from that huge storm two years ago, it’ll need at least another decade of work to restore dozens of communities.

Ellingson says: "There are just literally thousands and thousands of families still living in FEMA trailers. The businesses, they’re getting their work done, casinos and things like that that have the funds, but the little guy, the individuals are really still struggling and will be struggling, we’ve been told, 12 to 15 years just to get back to a new normal."

The Ellingsons are planning another weeklong trip in January, that’ll be their sixth since Katrina struck. He encourages Iowans who are interested in lending a hand to a similar project to check with their nearest church or civic group. He adds, you don’t have to journey to Mississippi to make a difference; there are plenty of worthwhile projects here in Iowa where a few able-bodied folks can open their hearts and lend a hand to help change their piece of the world — for the better.