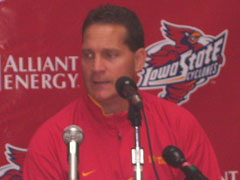 Game week is finally here as both Iowa State and Iowa open threw football season. The Gene Chizik era begins on Thursday night when the Cyclones entertain Kent State. The Golden Flashes opened 5-2 in 2006 before finishing with a 6-6 record.

Coach Doug Martin’s team has high hopes coming into the season. Martin says they’ve had one of the better defenses in the conference the last couple of years, and credits that to speed. He says they recruited kids who could run. Offensively Martin says they have more speed and the offensive line is the strength.

The Mid-American Conference has pulled a number of upsets over the years and Martin says Kent State would like to join that list. Martin says a few years ago they had several upsets on the same day. He says playing these games close and counting them as a moral victory are past.

Martin says with a new coaching staff at Iowa State they are not sure what to expect from the Cyclones. He says they’re concentrating mainly on what they do the best so their execution is as good as it can be, and as the game goes on they’ll get a read on what ISU is doing.

The Iowa Hawkeyes open the season on Saturday in Chicago’s Soldier Field against Northern Illinois. The depth chart at wide receiver looks a lot different now following the arrest and suspension of sophomore’s Dominique Douglas and Anthony Bowman.

Iowa coach Kirk Ferentz says they have some veteran performers who can step up and do a good job. Ferentz who does not feel the changes will put added pressure on sophomore quarterback Jake Christensen who becomes the full-time starter this season. Ferentz says it’s just like an injury, when someone goes out, someone else comes in. He says Iowa has had a lot of great stories of guys stepping up, and he hopes that happens again. The Hawkeyes are looking to bounce back from a disappointing 6-7 record in 2006.