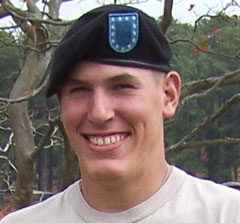 Authorities in southeast Iowa are searching for a young man, who went missing after a weekend car crash.  The Washington County Sheriff’s Department believes 19 year old Phillip Charles Kron of Riverside was behind the wheel of a car that crashed in the northeast part of the county Sunday evening.

Kron, who’s a student at Kirkwood College in Cedar Rapids, did not show up for classes on Monday. Washington County Sheriff Jerry Dunbar says they have not yet received any tips from the public that would help them find Kron. Dunbar says they have employed the help of the Iowa National Guard and Civil Air Patrol and could also bring in canine units.

Phil Kron is described as a white male, 6’2", 170 pounds with brown hair and eyes. He was last seen wearing his military uniform, which included a tan t-shirt. Kron also has a tattoo of a cross on his left shoulder. Sheriff Dunbar says that anyone with information on the whereabouts of Phil Kron should call the Washington County Sheriff’s Department at 800-TIPS-492.