You are here: Home / Politics / Govt / Huckabee says now’s not the time for "Establishment" Republican 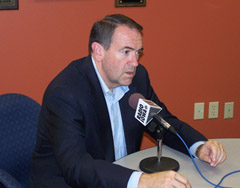 Republican presidential candidate Mike Huckabee says his second-place finish in the Ames Straw Poll shows he is "for real" and he’s prepared to ramp up his campaign for "phase two."

"What we’re doing right now is trying to just catch our breath," Huckabee says. "But coming back this week has been a great opportunity to see the momentum continue."

Huckabee plans to add staff in Iowa and stress that he’s more interested in Main Street than in Wall Street. "My message is not ‘Establishment Republican’. That’s one of the reasons it’s resonating with so many people because people don’t want another ‘Establishment’ candidate," Huckabee says. "They know that that’s a losing formula for us next year."

For example, Huckabee is critical of bureaucrats in government who he accuses of being more interested in the red tape than in serving the public and he cites what happened after hurricanes struck the Gulf Coast two years ago.

"The real disaster of Katrina as well as Rita was you had a lot of bureaucracy that was far more interested in making sure the paperwork was properly filled out than they were that you had people standing in water up to the chests for five days and nobody getting them out of it," Huckabee says. "That should never, ever happen in this country again."

Another Republican presidential candidate — John McCain — has called on Idaho Senator Larry Craig to resign because it’s been disclosed Craig pleaded guilty to trying to have sex with an undercover policeman in a men’s room at the Minneapolis airport.

Huckabee, a Baptist minister by trade, is hesitant to call for Craig’s resignation. "I don’t know what Larry Craig did. Don’t know exactly what the facts are, but if it turns out that he’s not been honest and, you know, really has dishonored his position, then Republicans ought to be just as adamant about consequences for him as they would have been for Bill Clinton," Huckabee says.

Huckabee, who campaigned in Pella and Des Moines Tuesday, made his comments during an interview with Radio Iowa.