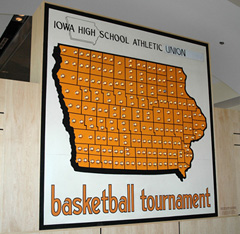 An electronic map of Iowa, that many thought was destroyed, is now on display at the Iowa Hall of Pride in Des Moines. The map, with 198 blinking lights, was a fixture for more than 50 years at Vets Auditorium in Des Moines during the girls and boys state basketball tournaments.

Bulbs would light up indicating the location of the two teams on the court. Iowa Hall of Pride Director Jack Lashier says after the final tournaments at Vets in 2005, organizers considered fixing the giant map for the move to Wells Fargo Arena.

"But when they found out how much it was going cost, they decided it was more than they wanted to spend," Lashier says, "and several people thought the board had been thrown away. But, it resurfaced, and we’re happy that it did." It turns out, the map was sent to an electrical instructor in Indianola. The map was retrieved last year from a warehouse. Lashier says, thanks to public demand, the map has been re-wired and re-furbished for public viewing.

"As you walk in the front door," Lashier says, "that’s the first thing you see. It’s a great piece of Iowa memorabilia and we’re happy to have it at the Hall of Pride." Thousands of young Iowans, who may not be so young now, played in front of the lighted map.

Now, those Iowans can have their picture taken in front of the map at the Iowa Hall of Pride. The Iowa Hall of Pride is located next to Wells Fargo Arena in Des Moines. The museum opened two years ago features exhibits honoring past and present Iowa high school students and athletes.