You are here: Home / Crime / Courts / Gay couples line up in Des Moines for marriage licenses 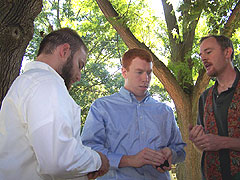 Twenty-four-year-old Sean Fritz and Tim McQuillan stood under a shade tree as a Unitarian minister from Des Moines performed the hastily-arranged ceremony in his front yard at about 10:20 a.m.

Fritz proposed to McQuillan last night when he heard a Polk County judge had ruled Iowa’s law forbidding gay marriage was unconstitutional. Fritz went to the store and bought wedding rings last night, then got on the Internet to find the paperwork for a Polk County marriage license.

"There was a lot of double-checking everything on the Internet to make sure that we got all the paperwork filled out correctly the first time," he says. "We didn’t want to get refused because we messed up a ‘t’ somewhere."

Fritz says he called McQuillan’s mother in California to ask permission to marry her son. McQuillan says Fritz then got in touch with him. "He instant messaged me over the Internet that this was going on," McQuillan says. "When he picked me up around nine o’clock he proposed to me on the spot. Besides the obvious shock, I still haven’t recovered. Maybe it’ll set in later this week."

Michelle Garland of Ames, the couple’s next-door-neighbor, served as a witness on the couple’s marriage application and she lined up the judge who granted the waiver allowing the couple to try to marry today rather than wait the required three days before marrying. "I’m just so happy to be in Iowa for this and so happy to be a part of their wedding," she says.

’s 10-year-old, Esther, was the flower girl for the ceremony.  Both men had to stoop to sign the marriage license as the document was placed on the only flat surface available – the minister’s front sidewalk.

Gay couples started lining up outside the Polk County Recorder’s office at five o’clock this morning.

Lori Septer of Altoona was among the first to fill out paperwork with her partner. "I was nervous, believe it or not," she says. "We’ve been together 12 years. We’ve waited for this, but I was still nervous. It’s something I’ve never done in my life because I’ve never been afforded this right before so that’s why we weren’t going to waste any time."

Kelly Bertelsen was introduced to Septer 25 years ago by a mutual friend and they’ve lived together for 12 years. "If the stay doesn’t go into effect, we’ll be married on Thursday," she says. "We’ll find a justice of the peace."

Bertelsen’s mother, Sandy, was a witness for their marriage license application. "They are commited. They are great kids," she says. "They are just so happy."

Hurley says it’s time to defend the concept of one-man/one-woman marriage by passing an amendment to Iowa’s constitution.

Late yesterday, a Polk County judge ruled a state law stipulating the only legal marriages in Iowa were between a man and a woman was unconstitutional.

You may listen to the marriage ceremony by clicking on the audio link below.