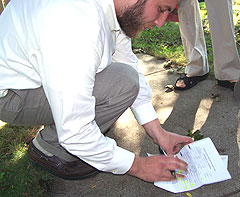 Two Iowa State University students believe they are the first and perhaps only gay couple to marry today in Iowa.

Late Thursday, a Polk County judge ruled the state law which restricts marriages in Iowa to those between a man and a woman is unconstitutional. Gay couples started lining up at the Polk County Recorder’s office early Friday morning to apply for marriage licenses.

Twenty-four-year-old Sean Fritz and 21-year-old Tim McQuillan not only got a marriage license, they got a waiver from a judge so they wouldn’t have to wait three days before marrying. An hour and a half later, the couple tracked down a Unitarian minister.

Reverend Mark Stringer stood under a shade tree in his front yard to conduct the hastily-arranged ceremony, which took six minutes. "You know, this is highly unusual that I have a chance to marry — in a real way — two people who love each other and who have been not allowed to marry each other in this state," Stringer said. "It breaks my heart that it’s taken us this long to be here, but I’m glad to be helping them do this today."

Two witnesses signed the document, then the minister added his signature and the date. "Check it out. It’s my anniversary," Reverend Stringer said. "That’s awesome. I’m marrying you on my anniversary. I like that."

Fritz and McQuillan plan to hold another, less-harried ceremony later, but the couple exchanged rings this morning. "The ring is a symbol of holiness and affection and peace and as you wear it on each other’s hands, you remind yourself of the commitment that you make today, a commitment that you’re really going to have a chance to really, fully take at another time," Stringer told the two. "But for expediency’s sake, and for the sake of your relationship which would not be allowed if we don’t do it soon, go for it. Put ’em on each other’s hands."

Reporters and camera operators formed a semi-circle in front of the couple and the sound of clicking camera shutters could be heard throughout the event.

"I think we’re married. That’s it. We’re married," Fritz replied. The couple then dashed to their car and drove to the Polk County office building to file the marriage license.

A group of Republican legislators met by phone to plot strategy for passing an amendment to Iowa’s constitution that would outlaw gay marriage.

Reverend Jeff Bradley of the Heritage Assembly of God in Des Moines is a member of the Iowa Family Policy Center’s pastors advisory council. "The primary concern here is I think that one judge rendered an opinion that basically overturned the law or the will of the people," Bradley says.

Bradley is among those who argue "traditional" marriage between a man and a woman is the foundation of our society. "Today we see a fundamental institution that has been proven over time to be what is best for families and what is best especially for children in those families — that has been tampered with and that has been altered," Bradley says.

Bradley is urging lawmakers to set the wheels in motion so Iowa voters can enact an amendment to the state’s constitution to make gay marriage illegal in Iowa. "I think too often we’re portrayed as someone who bashes people who are gay. We want what is best for them as well," Bradley says. "Our thinking here today is that they have changed something that has been fundamental to society or at least are in the process of trying to change something and that is really what is at issue here."

Governor Chet Culver issued a statement last night saying he "personally believes marriage is between a man and a woman." Late this morning, Culver said lawmakers should wait until the case has worked its way through the courts before taking any other action.