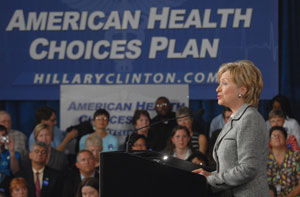 Democratic presidential candidate Hillary Clinton proposes that everyone in America carry health insurance in the same way all drivers are required to have car insurance.

Clinton released the details of her health care reform agenda in a speech at Broadlawns Hospital in Des Moines. It’s the largest-publicly funded hospital in Iowa; half of the patients are uninsured.

"I cannot think of a better place to discuss America’s health care crisis than a medical center that confronts the consequences every single day," Clinton told a crowd of about 200 who gathered in the hospital’s gym.

Clinton proposes tax credits for businesses that provide health insurance as a benefit and government subsidies to those who cannot afford to buy policies on their own. She also proposes new restrictions on insurance companies to cut the number of Americans who are denied a policy because of a pre-existing condition or a genetic test that shows the potential for future health care problems.

"We can no longer tolerate the injustice of a system that shuts out nearly one in six Americans," she said. But the centerpiece of Clinton’s plan is the mandate that all Americans carry a health insurance policy.

"A growing number of CEOs and union leaders are coming together because they agree that now is the right time to renew the national call for quality, affordable health care," Clinton said. "When Andy Stern, the president of SEIU, stands with Lee Scott, the president of WalMart, and they both demand health care reform that covers everyone, you know we’re ready for change."

Clinton promises to enact health care reform in her first term if she’s elected, and she said her failed attempt to reform the nation’s health care system over a decade ago left scars that toughened her up for the fight ahead and led her to offer a "simpler" plan.

"My Republican opponents will try to equate health care for all Americans with government-run health care. Well, don’t let them fool us again," Clinton said. "This is not government run. There will be no new bureaucracies. You can keep the doctors you know and trust. You can keep the insurance you have if you like it."

Clinton’s rivals from both sides of the aisle apparently don’t like her plan. Democrat John Edwards says Clinton doesn’t do enough to tackle the insurance and pharmaceutical industries which he blames for standing in the way of reform.

Democrat Barack Obama is pointing to Clinton’s failure on health care reform in the ’90s as evidence she may not be able to bring people together and accomplish anything. Republican Mitt Romney said "Hillarycare continues to be bad medicine" and today’s version isn’t much better than the original 1990s version of "Hillarycare."

Click on the audio link below to listen to Clinton’s speech in Des Moines.