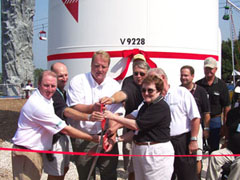 Iowa Governor Chet Culver is in Europe this week for several renewable energy events. Culver talked with Radio Iowa about the upcoming trip at the recent dedication of the wind turbine at the Iowa State Fair. (Photo at right)

Culver says the state needs to continue the focus on bio-fuels that he says has already had an eight billion dollar impact on the economy, and now he wants Iowa to be number one in wind energy and the job creation and production related to wind power.

Culver says 42 countries will have representatives at the wind conference. Culver says a lot of the European companies are making strategic decisions to move their operations to North America. The governor says Iowa already has three of the five wind turbine manufacturers in Iowa, and he wants to continue that with tower manufacturers and blade manufacturers.

Culver says Iowa isn’t the only state vying for the European companies. "It’s a very competitive environment," Culver says,"just with wind alone, we’re talking about a 20 billion dollar impact on six or seven states over the next seven years, so we want to be very aggressive in terms of selling Iowa, and encouraging people to come here." The wind trade show the governor will attend is called the largest in Europe.