You are here: Home / Military / Iowa Marines head out for tour in Iraq 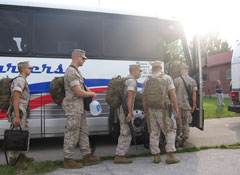 About 150 Marine reservists said goodbye to family and friends at Camp Dodge in Johnston this morning.

They’re bound for a year-long tour of duty, including up to eight months in Iraq. This will be the third trip to the region for First Sergeant Duane Hauer of Richmond, Wisconsin. He says the Company E, 2nd Battalion’s mission is still undetermined.

"We could be patrolling the streets in and around Fallujah or Baghdad," Hauer says, "or we could be providing security for convoys or camp security. It could be any myriad of things. In my experience of being deployed, (the mission) can change any number of times." Around 40 percent of the company’s current Marines also served with the unit during it’s first tour of Iraq in 2004. Hauer says the best way to prepare a Marine who’s making his first trip to Iraq is with intense training.

Hauer says, "The young Marine who leaves here right now with a little bit of butterflies in his stomach, that’s what you want, because you don’t know what to expect. But knowing that you’re going to be trained properly and have the proper tools to accomplish your mission, makes it that much easier once you step onto the ground, because they’re like, ‘ya know what? I’m ready for this.’"

Company E, 2nd Battalion is comprised of reservists from around Iowa and eight other states. Lance Corporal Dana Livingston is making his second trip to Iraq. The 28 year old is from Lewis, in southwest Iowa. His mother is Diana Livingston. Diana says Dana enjoys the Marines, "We’re proud of him, he said he’s very trained to do what he does and he does a good job. We don’t want him to go, of course, but we’ve prepared for it. It’s hard to see him get on the bus and actually leave…that’s when it kind of hits you."

Diana hugged Dana’s wife, 24-year old Dawn Livingston. Dawn wiped away tears as the bus rolled away from Camp Dodge. Dawn said, "I’ve been very strong and I planned on being strong for him the whole time, so he has not seen me cry yet." Diana added, "She’s done real well." The Marines will undergo three months of training in California. They’ll return to Iowa over the Christmas holiday, before heading to Iraq.