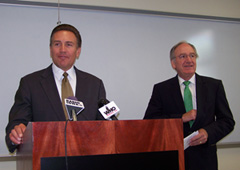 Harkin, a democrat, says the bipartisan bill has passed the House and Senate and is awaiting President Bush’s signature. Harkin says one provision of the bill raises the amount of federal Pell grants each year through 2012.

He says the average debt of a teacher graduate is nearly $23,000, and capping the debt repayment would cut the teacher’s monthly payments by 120 dollars, or 43-percent. And if the teacher stays in the field for 10 years, the loan would be forgiven.

Grand View College President Kent Henning says 53 to 54-percent of the school’s graduates entered the public service fields each year. Henning says society does not always reward them with the highest salaries and he says there is concern that students would change their career choice because of student loan debt.

Henning says students at his school often have lower loan debt than the public universities, but still face a challenge in paying off that debt. Harkin says President Bush has said he will sign the bill, and it’s just a matter of when.