You are here: Home / Agriculture / Harkin says deputy will fill in as Ag Secretary resigns 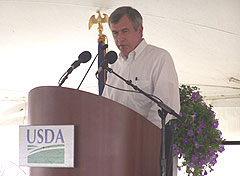 Johanns, a Republican who grew up on a dairy farm near the Mitchell County town of Osage, is expected to announce he’ll be running for U.S. Senate. Iowa Senator Tom Harkin, a Democrat, says Johanns’ departure from the U.S.D.A. is unfortunate.

Johanns, the former governor of Nebraska, is expected to run for the Senate seat which is now held by the retiring Republican Chuck Hagel of Nebraska. Harkin says Deputy Ag Secretary Chuck Conner is being named as acting Ag Secretary. “Chuck Conner I’ve know for almost 20 years, I guess. He worked for Dick Lugar here in the Senate and I know him very well and I think that is a good choice to fill in for the secretary, at this point. Chuck knows the Farm Bill, has been involved with us in all the deliberations and I think this will make for a smooth transition,” Harkin says.

Conner is a former corn lobbyist, a former staff director of the Senate Ag Committee and is a former president of the Corn Refiners Association. Some leaders of farm groups are angered by Johanns’ decision to step down before the new Farm Bill is passed through Congress, but Harkin says it shouldn’t be a big concern.

Harkin says: “Chuck Conner really was doing all of the inside work himself on (the Farm Bill) anyway. He knows the ropes. He has a great deal of confidence among people up here on both sides of the aisle, quite frankly. In fact, in many ways, Chuck Conner is much better known up here than Mike Johanns was, simply because he’s been around so long.”

In his farewell outside the White House, Johanns said: “Even as I look forward to returning to the good life in Nebraska, I look back on what has been truly an opportunity of a lifetime; for me a dream come true for a farmer’s son. So I stand here today and I humbly thank the President of the United States — thank you for allowing me to share this part of the journey with you. Mr. President, may God continue to bless and guide Laura, you and your family.”