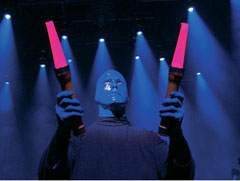 If the Smurfs grew up, shaved their heads and started playing rock music on home-made instruments, they might resemble the oddball stage show coming to Iowa next month.

Thirty-two-year-old Texas native Wes Day has been touring with the three-member Blue Man Group for more than a year.

He dons shiny blue grease paint on his head and slips into a black jumpsuit to entertain and amuse sell-out crowds across South, Central and North America. “It’s really nice to play a character that gets to do all of these funny bits and then turn around and play some slammin’ rock music with a great, amazing band behind us. You know, we hit the drums and paint flies off of it. It’s certainly invigorating, that’s for sure,” Day says.

Day says they combine music, comedy and multi-media theatrics to create a unique form of entertainment. Day says: “One of the biggest surprises about Blue Man Group is the amount of humor that comes with the show. A lot of people hear that these three blue guys come out and sort of explore the audience and go out and they’ll look at you. People hear a single-colored character and they hear a clown character and they think it’s artsy-fartsy and pretentious, but in actuality, it’s really funny.”

When Day isn’t on the road, he calls New York City home. He hopes to be able to take time out during this tour, on his second trip through Iowa, to see the Field of Dreams. He says people never really know what to expect when they go to their first Blue Man show.

Day says: “There’s a lot of slapstick humor. There’s one point in the show where one of the guys snaps another one on the butt with a towel. Then there’s some high-brow humor too where we’re making fun of the music industry and we’re kind of making fun of the art world. It’s a really funny Marx Brothers-type of…we like to refer to our show as kind of a modern-day Vaudeville.”

While members of the band are known for their shiny blue heads, neck and faces, Day confesses — he doesn’t shave his head daily; it’s a bald cap. The Blue Man Group is performing at The Mark of the Quad Cities, in Moline, Illinois, on October 19th and in Des Moines at Wells Fargo Arena on October 20th. For more information, visit www.blueman.com .