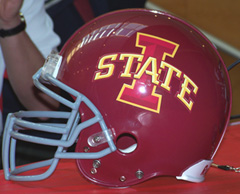 Cy is taking a back seat to the letter "I" at Iowa State. The athletic department unveiled a new logo that replaces the cardinal mascot with a cardinal colored capital "I" with a gold colored "State" superimposed over it. (Photo:new ISU logo)

Iowa State athletic director Jamie Pollard says the school is not abandoning the use of Cy as the mascot. "Cy isn’t going away, we love Cy," Pollard says, "Cy is a great mascot and we can effectively use Cy with our new wordmark to be able to promote Iowa State athletics. Much like Disney made the choice to promote the ears, but still uses Mickey, and McDonald’s promotes the Arches, but still has Ronald, the Cyclones will still have Cy."

Pollard says the logo will be on the football helmet beginning next season. He says they feel the logo really identifies Iowa State Athletics and will become the primary mark for the program in the 2008-2009 season and it will be at the center of the football field and the basketball court. 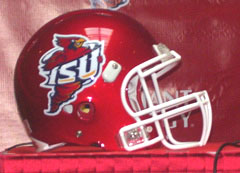 Pollard says currently there are several different logos used by the department and this will help give Cyclone athletics a better identity. (Photo: current ISU logo)

Pollard says the coaches expressed concern that recruits didn’t know who they were representing as they though they were Louisville with the cardinal, or Illinois State.

Officials also unveiled new football uniforms for next season that will include the UCLA stripes the Cyclones featured in the 1970’s. The helmet was originally to be white but will now be cardinal after backlash from the fans.