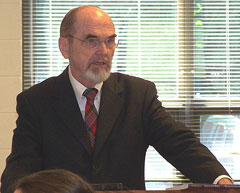 A theologian, author and leader of the national Presbyterian Church is making two stops in Iowa this week to plead a Biblical case for equal rights for homosexuals.

Jack Rogers, a professor emeritus at San Francisco Theological Seminary, has spent 18 months touring the country, calling for an end to the discrimination which he says will contribute to the healing of the Church.

"We’ve been in very deep conflict over the question of the status of people who are homosexual for at least 30 years," Rogers says. "I used to be very opposed to the full inclusion of people who are gay and lesbian and my mind changed when I had to do some deep study of the Bible." Rogers’ latest book, "Jesus, the Bible, and Homosexuality", details his change of heart on the issue.

Rogers, the 2004 Moderator for the General Assembly of the Presbyterian Church, says current church doctrine on the gay lifestyle is based on false premises and distortions. He says the time has to come to redefine our understanding of sexual identity and Christian faith.

"I’m coming now to try to share my journey with people and suggest that we’re going to heal our divisions when we do the right thing which is to go back to our core values and to accept everyone on an equal basis," Rogers says. In his year and a half of touring the country, Rogers says most of the people he draws to his lectures are from what he considers the center of the Church.

"They’re straight people but they’re people who have the intuition that we all ought to treat everybody equally but they’ve been told that somehow there’s an exception for gay and lesbian people," he says."I’m there to say that we shouldn’t make exceptions. When we make exceptions, we’re usually wrong. We’ve been wrong before on the question of race and women and we need to change our minds on this one as well."

Many people who think gays and lesbians should not be welcomed into the church quote Bible verses that say homosexuality is an abomination. Rogers says he welcomes a discussion with those people. "You know, there are only eight texts in the whole Bible that people use to condemn homosexuality and there are about three-thousand texts on how God is concerned for the poor and the oppressed, so I think we’ve got our priorities wrong to start with," Rogers says.

He says if you look at those eight texts in their ancient context, "they just do not apply to contemporary Christian people whose sexual orientation is gay or lesbian." Rogers is speaking tonight at Westminster Presbyterian Church in Des Moines and he’ll speak Thursday in Cedar Rapids. It’s a homecoming, of sorts, for Rogers. He and his wife made their first home together as a married couple in Des Moines in 1957. Rogers was then pastor of Westminster, the church where he’s speaking tonight. For more information, visit www.drjackrogers.com .