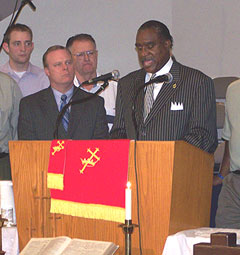 Some Iowa clergy are joining forces to fight what they call a "campaign to undermine marriage and silence the church."

Reverend Keith Ratliff  (photo right) spoke today at a press conference at his Missionary Baptist Church in Des Moines. He was joined by other local pastors.

Ratliff said, "We exhort all of our fellow pastors and church leaders to join us in this spiritual, moral, and legal battle." The pastors are planning to lobby state lawmakers. Ratliff says they’ll work to pass the Iowa Marriage Amendment, which would define marriage as only between a man and a woman.

The pastors’ effort is in response to an August 31st ruling by a Polk County judge that briefly legalized gay marriage in Iowa. "Just because we disagree with same-sex marriage, doesn’t make us homophobic,for we don’t hate or fear homosexuals," Ratliff says, "We just disagree with the lifestyle."

Ratliff says they will also prepare to address a "larger agenda" which includes so-called hate crimes legislation. Ratliff says the group of pastors also plans to distribute DVDs titled ‘Censoring the Church’ across Iowa. "Because preaching the gospel is now being threatened," Ratliff says.

The pastors say they’ll work closely with other groups like the Iowa Family Policy Center, the Iowa Christian Alliance, and Concerned Women for America of Iowa.