You are here: Home / News / Iowan Whitson ready to rocket back into space 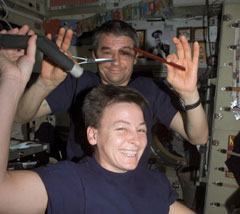 The only Iowa woman to rocket into space, astronaut Peggy Whitson will return to orbit next week aboard a Russian Soyuz spacecraft. A Mount Ayr native, Whitson has been chosen to command the "Expedition 16" crew that’ll be aboard the International Space Station for six months.  (Photo: Whitson on previous mission in space)

In a telephone interview from Kazakhstan, Whitson acknowledges she’ll be the first woman assigned as mission commander. Whitson says: "I think they needed for this particular mission a commander, because of the complexity of missions, I think it made it better to have an experienced station crew member be involved. Maybe I just got lucky, being in the right place at the right time but I’m real happy to get the job."

Whitson spent six months on the space station in 2002 and this will be her second trip into orbit, her first aboard a Soyuz. American space shuttles were used for both trips up and back the last time.

As commander, Whitson realizes her space walk won’t be a cake walk. Whitson says: "It is a lot of additional responsibility, of course too, since I have the responsibility for the safety of the crew and the station. It’s quite a bit more added responsibility from a mental perspective." Whitson says preparations for launch in Kazakhstan are much different from the program at Kennedy Space Center.

For starters, the surroundings are far from the lush climate of Florida’s Atlantic coast. She says: "We’re in the steppes of a desert out here. There’s camels around. It gets pretty cool at night and pretty warm during the day. We got lucky and it cooled off here recently. It’s not as much fun to be outside since that 20 mile-an-hour wind across the desert is a little harsh if it’s cool."

Liftoff is scheduled for Wednesday. She and the crew will dock with the space station next Friday. Nebraska native Clayton Anderson is already on-board the orbiting station. He’s the first Iowa State University graduate in space. Anderson has been in space since June. He’ll return to earth on the next shuttle mission, which is scheduled for launch later this month.