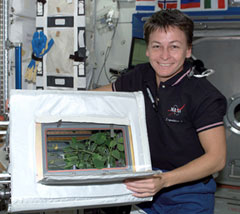 A southern Iowa native astronaut rocketed into orbit this morning from a launch pad in Kazakhstan. The mission promises to bring another historic first for Peggy Whitson. The launch of the Soyuz at sunset in Baikonur went flawlessly.

Stuffed alongside her crewmates, a Russian cosmonaut and the first Malaysian in space, Whitson says her ride this time is nothing like the more-spacious space shuttle. She says the Soyuz is more like putting three people in the front seat of a Volkswagen.

In a NASA-TV interview, Whitson was asked if she faces any special pressures, being named as the International Space Station’s first woman commander. The 47-year-old Whitson says, "I hope not," and laughs. "I think it’s special that I get the opportunity to play that role. But I think it’s also special to have an opportunity to demonstrate how many other women also work at NASA, so I’d like to be able to do that as well."

Whitson is a 1978 graduate of Mount Ayr Community High School and she has degrees from Iowa Wesleyan College and Rice University. She recalls watching the Apollo missions on TV as a girl which landed the first men on the moon. Whitson says: "I thought what a cool job. It really didn’t become a reality to me, to become a goal, until graduated from high school, which was, coincidentally, the same year they picked the first set of female astronauts. I think that was when I decided I wanted to become an astronaut."

The Soyuz will rendezvous with the space station around 10 A.M. Friday. Whitson, a Beaconsfield native, will stay aboard six months. Her first trip there was in 2002 as she became the first Iowa woman in space. She was also the station’s first Science Officer.

Already on-board the station is astronaut Clay Anderson, a Nebraska native and the first Iowa State University graduate in space. Anderson is scheduled to be coming home aboard the shuttle Discovery in early November.