You are here: Home / Human Interest / Iowan Whitson set to blast into space 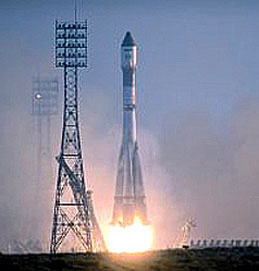 Iowa-born astronaut Peggy Whitson is scheduled for her second liftoff into space this morning. Instead of riding aboard a shuttle, she’s in Kazakhstan and will climb aboard a Russian Soyuz rocket to blast off for the International Space Station.

Whitson, a native of Mount Ayr, says during her time training in Baikonur, she’s noticed how very serious everyone there is about spaceflight.

Whitson says: "The Russians seem to value their traditions a lot more than we do so there’s a lot more traditions. After we passed our final exam, then we’re presented very formally to the various heads of the Russian space agency. We went to Red Square and had pictures taken there." It’s also considered bad luck for the astronauts and cosmonauts to witness the roll-out of their rocket. She says the Russian capsule is significantly smaller than America’s space shuttles, but she’s learned to quickly adapt.

"The Soyuz is much more like our Apollo vehicle," Whitson says, "it’s Volkswagon-sized for three, three in the front seat of a Volkswagon crammed in. It’s a lot less comfortable in the sense of having the roominess of a shuttle launch." Over the many decades, the Soyuz has had some slight modifications, but it’s very much the same tried-and-true ship the Russians have used since the Apollo era. Though it’s a tight fit, Whitson says being cramped is part of being an astronaut.

Whitson says: "We’ll only be on the vehicle a couple of days before we actually dock with the station so it doesn’t really matter that much. The Soyuz spacecraft, obviously, does offer some great reliability. It’s a very proven vehicle." During the six-month mission aboard the space station, Whitson will be the first female commander, given her experience during a previous six-month stint aboard the orbiting station in 2002.

The first Iowa woman in space says she looks forward to several spacewalks during the months ahead — E-V-As in NASA-speak for extra-vehicular activity. Several new segments will be added to the station, nearly doubling its size.

Whitson says: "I’ll hopefully be performing three different EVAs to connect up the Harmony Node 2 module that will allow us to accept the new modules from the Japanese space agency and the European space agency. It’ll be exciting to get to do those complicated EVAs as well." Liftoff is scheduled for 8:21 A.M. Central time. Whitson’s husband, her brother and his wife are all in Kazakhstan for today’s launch.