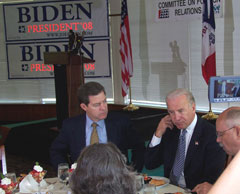 Two presidential candidates — one a Democrat, the other a Republican — joined today to make their pitch for a "political surge" in Iraq.

Republican Sam Brownback, a U.S. Senator from Kansas, and Democrat Joe Biden, a U.S. Senator from Connecticut who is chairman of the Senate Foreign Relations Committee, argue it’s time to press the Iraqis to set up regional states — most likely along religious or tribal lines.

"One of the purposes of us coming together is to talk about what we agree on," Biden told reporters.  Both politicians stress they are not calling for the U.S. or even the U.N. to decide the dividing lines inside Iraq, but concede they’d like the Bush Administration to start pushing Iraq’s current central government to institute the "federalism" that’s spelled out in Iraq’s new constitution, federalism that would see a weaker central government with most of the political power sitting in the regions of Iraq. The proposal they’re pushing has won the endorsement of the U.S. Senate on a 75-to-23 vote.

"What this is about is a serious foreign policy issue and to sow seeds of hope in this country that we can come together on a tough topic where there has been division all year long in this country on and find a bipartisan way forward," Brownback told reporters.

The two senators spoke at a Friday luncheon in Des Moines organized by the Greater Des Moines Committee on Foreign Relations. Biden said he and Brownback had bridged the partisan divide in Washington, D.C.

"The solution to our situation in Iraq is quite frankly more important than who among us will be the next president of the United States of America," Biden said at the beginning of his luncheon remarks. "…Until we can get it straight in Iraq, we are going to have great difficulty reestablishing our credibility around the world and quite frankly our flexibility at home to deal with many of the domestic issues we both agree and disagree on."

According to Brownback, the president of Iraq backs the idea of strong states and a weak central government in his country. "I’m urging the administration to send somebody like (former Secretary of State) James Baker, somebody else of stature to go over and to push the parties to move forward with a federalism approach," Brownback said.

Brownback contends once the political situation in Iraq stabilizes, U.S. troops won’t be targets and they’ll be able to remain in Iraq just as American troops remain in Korea and Bosnia.

Click on the audio link below to hear Biden & Brownback’s remarks.