You are here: Home / Politics / Govt / Actor in Iowa to sound alarm about America’s manufacturing base 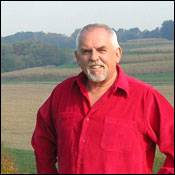 The actor who portrayed "Cliff" on the TV show "Cheers" says he’s now embracing a sort of Paul Revere role to warn the country of looming danger.  John Ratzenberger will be in Des Moines Wednesday night to talk about the loss of America’s manufacturing base.

Ratzenberger says American cities are dying and the middle class is dwindling because manufacturing plants are closing. Beyond the economics, it puts the country in peril from a security standpoint, too, according to Ratzenberger.

"We don’t even make the bullets that our armed forces use so what happens if that country decides, you know what, I think I’m standing on the other side of that war and we’re just not going to ship America any more bullets, or flak jackets or Jeep tires," Ratzenberger says. "Whatever it is, it’s insanity."

Ratzenberger’s appearance comes just days before the final shut-down of the Maytag plant in Newton. Ratzenberger suggests the CEOs of companies like Maytag are something akin to traitors of their country by shifting manufacturing jobs to other countries.

"Why are we building another country’s middle class and destroying our own?" he asks.  Ratzenberger says the whole idea of "being a patriot and loving this country" has gone by the wayside in too many corporate suites.

"They think more of their bottom line and their stock prices than their children’s future," Ratzenberger says. "…They just don’t get it. As long as the caddy has got their golf bags and, you know, their jets are fueled and there’s food in the refrigerator, they really don’t care about the country as a whole."

Ratzenberger, who says he doesn’t understand why the word "protectionist" is a bad word when it comes to U.S. trade policy, grew up in Bridgeport, Connecticut, a city he describes as the "jewel" of the industrial northeast.

"I was surrounded by people who actually made things for a living — my uncles, my mother, they all worked in factories — so my heroes were lathe operators, machine tool operators, people who could actually make things out of nothing, fix things, repair things, invent things," Ratzenberger says.

According to Ratzenberger, something changed in the ’70s and factory workers were too often portrayed as "idiots" in the media and too many accepted the "myth" that everyone should go to college. Ratzenberger, a former carpenter, says turning America into a "service economy" is perilous, and it’s time to restore America’s manufacturing might.

"I understand the danger of what happens when it disappears, that we in effect will become a slave nation," he says. "We have to start honoring the people who really work for a living, who make things."

While other actors like Ronald Reagan, Arnold Schwarzenegger and Fred Thompson have entered politics, Ratzenberger says he has no political aspirations. "What I’m about is really more of a Paul Revere mode of warning people of the industrial tsunami that’s heading our way," Ratzenberger says. "We’re losing entire communities and entire cities because manufacturing is leaving. If that keeps up, we’ve got six to ten years before we become a third world country."

Ratzenberger will host a "town hall meeting" Wednesday night at Hy-Vee Hall in downtown Des Moines to discuss these issues. Ratzenberger spoke with Radio Iowa by phone this morning. You can listen to the entire interview by clicking on the audio link below.

Ratzenberger played postal worker Cliff Claven on "Cheers" — a long-running comedy based around the interaction of patrons at a Boston bar. Ratzenberger is now the host of " Made in America " — a show that’s featured on The Travel Channel.  His trip to Des Moines is sponsored by The Alliance for American Manufacturing, a group financed by unions like the Steelworkers.