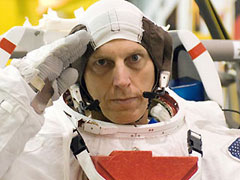 The first Iowa State University graduate to reach space is about to end his multi-month mission in orbit, though he’s emotionally divided about returning to Earth.

Astronaut Clay Anderson is the sort of person who likes to see results right away. He says learning patience has been his biggest challenge since arriving on the International Space Station in June.

In an interview with Radio Iowa from the station, the 48-year-old Ashland, Nebraska, native says he’d like to have another few months onboard. Anderson says: "It’s kind of a bittersweet time for me. I’ve had a great time up here. We’ve accomplished some great things and I’m very proud of what we’ve done. I think it’s time to turn over the reigns and head home and be with my family again."

Anderson says he’ll always remember his first spacewalk, as the bright full moon rose over the Earth’s horizon. It left him stunned as one of the most beautiful sights he’s ever seen. Anderson’s hobbies include song-writing, singing and playing the piano. Radio Iowa asked him if he’s had the chance to use the space station, orbiting our serene looking planet at 220 miles out, as a platform for some soul-searching song-writing.

"We have a guitar and we have an electronic keyboard and I love to do those sort of things," Anderson says,"I haven’t had much time to be able to do it. I’ve gotten partway through a piece I’ve started but I probably won’t have it finished before I get home so that’s something I’ll try to work on once I return to Earth."

While Anderson is a Nebraska native, he got his master’s degree in aerospace engineering from Iowa State University in 1983 — so his college football loyalties are divided. He says he created a football challenge, of sorts, with one of his space station experiments to test the design of plant growth chambers.

"I had the basil seeds were the Huskers and the lettuce seeds were the Iowa State Cyclones and I have to report that the Huskers defeated the Cyclones 28-to-zero with four plants grown on the basil seeds and none coming out on the lettuce side," Anderson explains,"we’re not quite sure why, I think they were overwatered, but it was a Husker victory."

Anderson even has a fully-inflated football on the space station which carries a big red "N" for the University of Nebraska. Anderson is due to return home in early November aboard the space shuttle Discovery, which is due for launch from Florida next week.