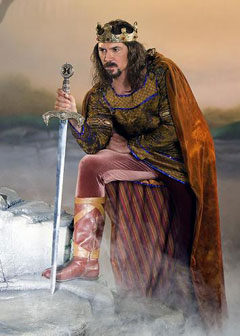 Most people are familiar with the storyline of “Camelot,” but the versatile Hollywood actor playing King Arthur in Des Moines next week says he’s encouraged by the new things people read into the lines.

The near-50-year-old musical is about the fictional medieval king of England but Lou Diamond Phillips says his Arthur translates very well to current events.

“It’s sort of amazing because these words were written in 1960,” Phillips says, “we didn’t go in and rewrite anything but there are so many beautiful passages within the play that, without to overly politicize it, speak to leadership and speak to the state of world affairs.”

Phillips, who’s appeared in more than 80 films and TV shows, says the Kennedy-era script “speaks” to today’s audiences, paralleling the centuries-old story with the modern war in Iraq.

Phillips says: “Arthur’s message, if you will, is he’s created the Round Table to bring peace to the world, to put an end to bloodshed, to create a society that is better for his people. In an election year and with the present state of our country, a lot of these really beautiful words resonate quite well with the audience.”

Phillips, a 45-year-old Texas native, says the King Arthur of “Camelot” learns it’s not good enough to be the strongest warrior, as he’s won every battle but accomplished nothing. He says his character is not so much on a quest for the Holy Grail as he is searching for peace, truth and tranquillity. “He cannot rest until he knows that he’s left at least that legacy to the world, “Phillips explains, “that’s in the final scene of the play. At one point, he finally says, ‘Perhaps people will sit around this world as we did at our table and go questing once more for right and justice and an end to war.’ It’s a beautiful line.”

Phillips first won wide acclaim with his portrayal of Ritchie Valens in “La Bamba,” and later won a Tony nomination for Best Actor for his performance as the King of Siam in the Broadway production of “The King and I.” With his Irish-Filipino-Cherokee heritage, Phillips laughs and says he’s drawing on his “Anglo roots” to portray the fabled British leader, Arthur.

“Camelot” opens Tuesday at the Civic Center of Greater Des Moines and runs through next Sunday. For information on the show, visit www.civiccenter.org.