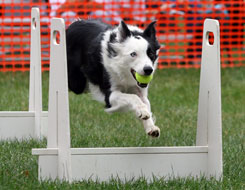 If you’re not a dog owner, you may never have heard of Flyball, what’s said to be the fastest-growing dog sport in America. A three-day Flyball tournament starts today in eastern Iowa that’s bringing in dozens of teams and hundreds of dogs from across the Midwest.

Judy Hagen, of Marion, is organizing the "Iowa Heartland Fall Fling Flyball Tournament" in the Amana Colonies. Hagen says Flyball is a relay race for dogs. Hagen says there are two four-dog teams racing down the course, over a series of four low hurdles, to a flyball box which they step or jump on to get their tennis ball, then they race back down to the start so the next dog can take off and get its ball.

A series of lights, like at a drag race, are set up at the start/finish line along with sensors and timers. Hagen says it’s a very fast-paced competition and the dogs love it. She says other dog owners say their canines can tell when they’re headed to the practice field. Hagen says: "When they hit Highway 13 on the way to practice, their dogs know where they’re going and are barking the rest of the way because they’re just so excited about the fact ‘It’s Flyball night! We get to go run!’ It’s good exercise for a dog. There’s too many dogs out there than need a job or need something to do and this gives them something to do."

Hagen says most dogs can be trained to compete in Flyball in just a few weeks. She says it takes no particular type of pooch to succeed in the sport, from Great Danes to Dobermans to even wiener dogs. She says a stubby-legged dachshund from Michigan runs the 52-foot long course "like a little streak" in just over five seconds. This weekend’s competition is bringing in nearly 60 teams of up to six dogs each from across Iowa, in addition to dogs from Wisconsin, Illinois, Missouri, Nebraska and Minnesota. For more information, visit " www.flyball.org " or call (319) 286-8294 for more details.