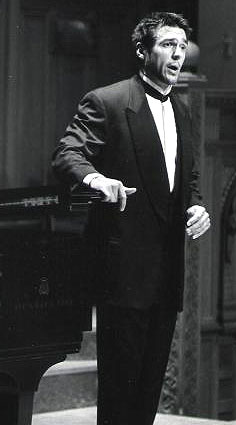 Many Iowans know pop singers like Britney Spears and Justin Timberlake but few can identify Nathan Gunn — for now. The 36-year-old Champaign, Illinois, man is a baritone opera singer, acclaimed to be one of the world’s best.

Gunn says this is an exciting time for opera, as people may know the Britneys and Justins, but they’re perceived as "hollow." He says, "I think today what people might be looking for is music with a little bit more substance that still speaks to them in a modern way." Gunn, who’s sung in top opera houses around the globe, says he aims to deliver just that — modern opera, in addition to the classics.

Gunn says he performs a lot of new opera being written by today’s composers, in English, which he says addresses subject matter you might not pick up on if it were being sung in German and referencing events from the 1700s. He says his typical audience will range from seniors in high school to senior citizens as opera appeals to all ages — and is growing in popularity.

Gunn says "It is one of the few things you can see that is live and that is unamplified, for the most part, where you’re dealing with just human vibration, whether it’s from an instrument being played or just a human being who’s vibrating and making sound that enters into your ear and communicates."

Gunn’s wife of 14 years, Julie, is his accompanist. Gunn performs Wednesday, (Oct 24) at 7:30 p.m. at Drake University’s Sheslow Auditorium. It’s a rescheduled performance as Gunn was supposed to sing in March in Indianola but had to cancel due to a severe blizzard that hit central Iowa. For more information about the singer, surf to www.nathangunn.com .