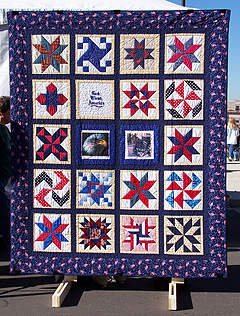 A quilt from a project started by an Iowa woman will be part of the exhibits at the National September 11th Memorial & Museum.

Betty Nielsen, of Fonda, presented the quilt to museum officials Tuesday during a stop in Des Moines of a traveling portion of the museum exhibit. Nielsen said she didn’t have anyone die in the September 11th attacks, but was still spurred to action.

Nielsen says everyone she asked wanted to help, and it started out small with some people in her parish. She says it grew larger and larger as people donated money and fabric, and the donations came from men, women and children all over the world.

Nielsen realized how important the quilts were when they took some of the quilts to New York to present to the families. "I’ll never forget the families’ expression, nor how the ministers formed a circle around us and prayed that we would continues this project," Nielsen says. Nielsen says it broke her heart when she noticed how the families embraced their quilts. Nielsen says they first planned to make five quilts, but ended up making some six thousand.

Nielsen donated one of the first quilts called "War Paint" to the museum. Nielsen says, "It is my hope that the visitors to the museum will understand how a group of people from a very small Midwestern town can come together and care about a group of people from across the country." The National September 11th Memorial & Museum is being built on the site where the World Trade Towers stood. Construction is currently underway on the museum, with steel for the memorial tower expected to start rising later this year.