You are here: Home / Military / McCain marks 40th anniversary of his capture in Vietnam 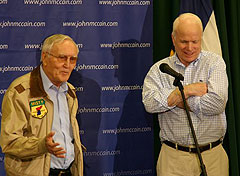 This is the 40th anniversary of the day Republican presidential candidate John McCain’s plane was shot down over Vietnam and he was taken prisoner.

McCain’s spending much of this Friday in Iowa with the man McCain says “literally saved (his) life.”

Retired Colonel Bud Day of Sioux City was in the prisoner of war camp where McCain was taken. McCain credits Day with keeping the American soldiers inside that prison in line.

“To help us to resist the efforts of our captors for us to do things that would have been dishonorable,” McCain said during a telephone interview with Radio Iowa this morning. “…It makes me again appreciate again how fortunate I am to live in a country like America. You don’t appreciate America until you’re parted from her company, and then you really appreciate what a wonderful nation we live in.”

Day, who is 82 years old, was 42 when he was captured and entered the prison where he and McCain were held for over five years. “We became brothers in that awful experience and came out with very common views on life, on politics, on people,” Day said, by phone.

McCain often describes Day as the toughest guy he’s ever met. Day laughed at that, but returned the favor with his staunch support of McCain’s presidential aspirations. “He’s a warrior, a natural leader,” Day said. “He’s the only one who’s got the international experience to run the country during a time of war.”

Day described campaign alongside McCain as “exhilarating” because McCain has an “incredible” sense of humor. “I’m just always delighted to be in his presence,” Day said, “and vice versa.”

McCain said he understands why some people have difficulty understanding why he has maintained a friendship with Day when their association reminds them of their time as prisoners of war.

“Bud and I were privileged to observe a thousand acts of courage and compassion and love. Our memories are not bitter ones,” McCain said. “Obviously we feel very — still — pretty strongly about some individuals we encountered that were our Vietnamese captors, but the camaraderie, the affection, the inspiration — Bud Day was the senior-ranking officer in almost every situation and he inspired us to do things that we were otherwise incapable of and so it’s not that these were bad memories. Many of them are most wonderful memories of my entire life.”

Click on the audio link below to hear more.