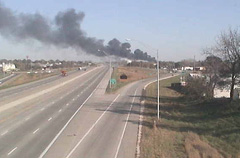 An explosion and fire at a chemical plant on the northeast side of Des Moines shut down the Interstate 35/80 east mixmaster and sent flames and large plumes of smoke into the air.

Wes Enos of Des Moines was traveling on the interstate and saw the first explosion at the Barton Solvents Company. 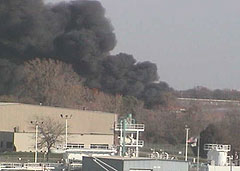 Ankeny when he saw “a nice big ball of what looked like the top of a mushroom cloud, just kind of coming over the top of the bridge there, and then you heard a big boom right after that.” Enos continued on into Des Moines and says he could still see the smoke.

He says you could see the smoke coming up over the top of the city, so it looked like a pretty serious explosion. Explosions were continuing to erupt from the fire as 10 area fire departments sought to put out the flames. So far there have been no reports on any injuries.