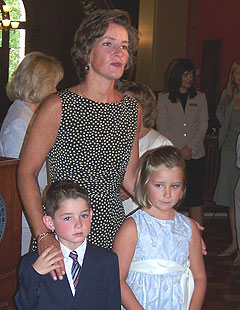 The First Lady says, during the last tri-mester of a pregnancy, a healthy baby should make about 10 fetal movements or "kicks" every 2 hours. Culver says most babies will make those ten movements in less than 30 minutes, "If the baby’s in distress or in some sort of danger – it’s an effective, quick way to monitor and get medical attention if necessary."

Culver, who has two young children, was asked to record the PSA by state representative Janet Peterson of Des Moines. Peterson lost a child, named Grace, to stillbirth in July of 2003. "Obviously, it was a devastating time for my husband and I," Peterson says, "and going through the grieving process, one of the things I wanted to try and do with all my heart, as a tribute to our daughter Grace, was make sure no other families have to endure the tragedy of a stillbirth."

Peterson says Iowa is the only state in the country collecting information from women who lose a child to stillbirth. "There’s 26,000 stillbirths in the United States every year," Peterson says, "but there’s been virtually no research done on what’s causing it and what women can do to prevent them from occurring." She says research has found, however, that fetal movements in the final months of pregnancy can reduce the risk of stillbirth. There are approximately 200 stillbirth deaths in Iowa every year.

Peterson and a group of other Iowa women that lost children to stillbirth have launched a website, www.countthekicks.org . The effort is sponsored by the Heinz Foundation. Peterson says she became friends with Teresa Heinz-Kerry while her husband John Kerry was campaigning for president in Iowa in 2003, during the time Peterson lost her child.

The PSAs are being sent to radio stations in Iowa and Pennsylvania. Peterson says if they notice an increase in activity on the website, they might produce PSAs for other states.