You are here: Home / News / Another battle flag now on display at State Capitol 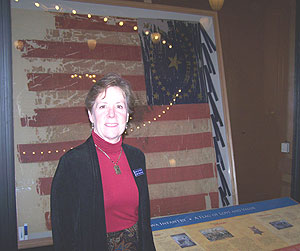 Another battle flag, carried by Iowa soldiers in the Civil War, has been restored and placed on public display at the State Capitol Building in Des Moines.

The State Historical Society has been working to restore nearly 260 battle flags since 2001. Many of the flags were in shreds, after hanging from poles and deteriorating under harsh light for decades.

The latest flag to receive full conservation treatment is the “Elson Flag,” which was carried by Iowa soldiers in the Battle of Vicksburg in 1862. Laura Lee Ramirez worked on the flag for nearly 16 months.

Ramirez says the Elson Flag will only be on display for a couple of months – before returning to dark storage for several years. The Elson Flag is named for Sgt. James Elson, who was awarded the Medal of Honor for his bravery at Vicksburg. The flag bears blood stains from Elson. “She’s in a tattered shape,” Ramirez says of the flag, “you can see a lot of souveniring going on…the soldiers would cut pieces of the flag out and take them home.” 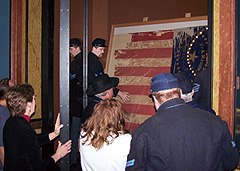 The Elson Flag was made by several women in Boston, Massachusetts. Rameriz says it was created after an Iowa soldier wrote to his sister about the Battle of Pea Ridge.

Ramirez says a man named George Adams wrote his sister, Fibi, explaining they did not have a flag.

That’s when Fibi got some women together and they made the flag by hand – eventually delivering it to Vicksburg, where it received most of it’s battle damage.   The Elson Flag will be on display at the Capitol Building through December 30th.