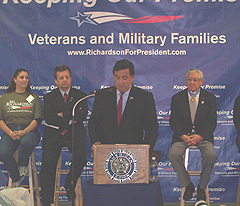 Democratic presidential candidate Bill Richardson today presented an Iowa woman with the medal her uncle earned in the Korean War.  On November 2, 1950, Corporal Clem Boody of Independence, Iowa, was listed as missing in action in North Korea.

"For many years I have been negotiating with the North Koreans. In fact, President Clinton used to say that bad people like Richardson, so we’ll send him to talk to them," Richardson said.

Richardson, a former U.N. Ambassador, had been pressing the North Koreans to help recover and return the remains of over 8100 Americans who went missing in Korea. This past April, Richardson was part of an American delegation that went to North Korea to collect the remains of six Americans. One of those soldiers was later identified as the missing Iowan.

Today, Clem Boody’s niece wiped tears from her face as Richardson handed her Boody’s Purple Heart. "Corporal Boody’s family…has been petitioning and waiting for over 50 years — waiting for the recognition that he deserves," Richardson said.

The medal ceremony was held in a V.F.W. hall near downtown Des Moines. Richardson used the occasion to outline his proposals for America’s military and veterans, like erasing federal income taxes for soldiers in their first year back from active duty and an overall five percent lifetime reduction in the income tax rates for all veterans. Richardson has also advocated a "heroes" card which would allow veterans to seek health care anywhere — not just in the V.A. system. Richardson said one reason such a move is necessary is because the V.A. "is not equipped" to handle the mental health care needs of veterans.

"Our veterans fought the enemy abroad," Richardson said. "They should not have to fight their government at home to get the health care that they deserve." Richardson also lambasted the recent glitch on military orders for some Iowa National Guard soldiers who served nearly two years on active duty — but were initially denied full-time education benefits. Richardson proposes increases in the scholarship levels for full-time military as well as guard and reserve soldiers.