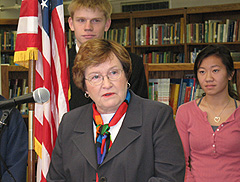 It is called the "One Iowa Award," and will "recognize and celebrate" the achievements of individuals, groups and communities who’re working to create a unified Iowa.

Judge says "One Iowa, one unlimited future" is the mission statement for the Culver/Judge administration, and the goal they’re seeking. She says they want a state where people of different backgrounds and different generations come together to work for the common good. Judge says making it a reality takes a lot of hard work and participation of all Iowans regardless of their race, age, gender, nationality or sexual orientation.

The lieutenant governor says the award is part of achieving their goal. "We know that when we recognized achievement, we bring the issue to the top and there’ll be more discussion about diversity and what we’re doing right and what we’re doing wrong,"Judge says. She says they hope the award will make people proud and will spur more "diversity action" across the state.

Judge is encouraging Iowans to make nominations for the award. She says nominees will be judged on a series of criteria, such a plans to address problems facing Iowa’s minorities, results they have achieved, and their vision for the future of the state. A panel from the governor’s diversity committee and the award’s corporate sponsors.

Judge says after the nominations have been reviewed, the final determination will be made by the governor’s office and it is her goal to name the first recipient of the award in early 2008. Some East High students joined Judge and talked about the importance of diversity. Jasmine Brown has this advice for those who live in areas that aren’t as diverse as Des Moines.

To nominate a group, business or organization for the One Iowa Award, go to the website: http://www.governor.iowa.gov/lt-governor/one-iowa-award.php , or call the Governor’s Office at 515-281-5211 for more information.