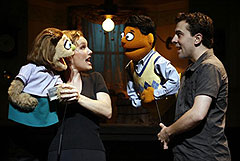 A musical comedy that bills itself as featuring "full puppet nudity" makes its Iowa debut next week. Playwright Jeff Whitty won a Tony Award in 2004 for "Avenue Q," which he says is the other side of the tracks from Sesame Street. The puppets in the show resemble the famous Jim Henson "Muppets," but he says make no mistake, Big Bird, Burt and Ernie aren’t here.

"It’s sort of like a ‘Sesame Street’ grown up," he explains, "the way that you learn life lessons as a kid except that you’re learning them with adult topics, like racism or finding your purpose in life or sexuality. All of these things are thrown into this mix. And then about half of the cast is puppets."

The storyline follows a young man who moves to New York with bright dreams of success, only to find himself struggling to survive in a neighborhood full of misfits. Whitty says sure, there’s puppet nudity, but it’s relevant to the plot. "They call it the ‘dirty puppet show’ but it’s really, really not that, so much. It’s got sort of a heart and message and sometimes people even tell me they cry." He says parents need to be aware that "Avenue Q" is not for kids.

Whitty says: "I wouldn’t want to take anyone under 13 but it depends on the comfort level of the parents as well. There’s a lot worse stuff on TV most of the time." The show took three Tony Awards in 2004, including those for Best Musical and Best Original Score. The show opens Tuesday at the Civic Center of Greater Des Moines.