You are here: Home / Business / Iowa businesses sign agreements to support the Iowa Guard and Reserves 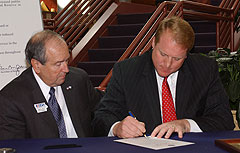 The leaders of some 70 businesses in the state joined as a group today in Des Moines to sign statements of support for the national guard and reserve. Governor Chet Culver also signed on behalf of the state. (photo)

Barry Spear, chairman of the Iowa program, says signing an Employer Support of the Guard and Reserve statement shows another level of support.

"It’s really a C-E-O’s mandate to his company that not only will we comply with the law, but secondly, we will go above and beyond, make a difference and support these men and women, civilian military, by guaranteeing their jobs," Spear says. Spear says when there are problems in Iowa, it’s usually because employers didn’t know all the rules.

Spear says in two and a half year in the volunteer job, he has yet to see an employer purposely deny a soldier a chance to come back and go to work. Spear says when there is a problem, the state gets it solved quickly. He says the national average to mediate and establish a solution when there’s a problem is 45 days, but in Iowa it’s 22 days.

Spears says over 99 percent of the problems they do find out about never get to the Department of Labor, as the state’s ombudsman takes care of them first. Leaders from businesses of all sizes signed the statements at the state historical building in Des Moines. Spear says the small businesses really have to give a lot when an employee leaves to serve in the military.

Spear says the company has to backfill the job, and when the employee comes back, they have to add another employee and have more workers than they need, or let the employee go who filled the soldier’s job. "It is a huge commitment from employers," Spears says. He says it’s made even harder when the soldiers are deployed more than one.

Spears, who works for Iowa Health Systems, says Iowa employers have stepped up and said they will make the commitment. Spear says some 200 other businesses across the state also sign the E-S-G-R statements today.