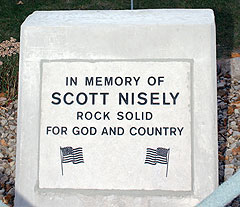 General Ron Dardis , the Commander of the Iowa National Guard, spoke about dedicating the post office on Veterans Day. Dardis says he could think of no better place to be on a day when American honors it’s veterans than to be honoring the memory of fallen comrade Scott Nisley.

Dardis thanks Iowa Congressman Tom Latham for introducing the legislation that led to naming the facility after Nisley. Latham credited others with the idea and following through. Latham says the idea came from fellow postal workers, comrades in the Iowa Guard, and from the community.

Fellow worker Karen Hines read a poem she had written about Nisely. Hines said, "Then tragedy hit, the towers would fall, our hero was ready, he answered the call. Nothing would stop him, he would soon volunteer. Training was over deployment was near. Guarding, defending, keeping us safe." Nisley was a Sergeant when he was killed and was posthumously promoted to Major. 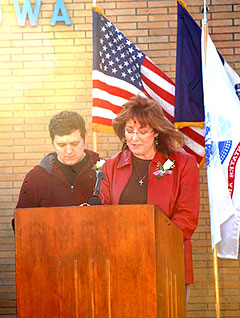 Nisely’s son Justin spoke about the efforts to honor his father. He says naming the post office after his dad really isn’t a memory for him, he truly believe that it is a testament to all the people who worked to get it done. Geri Nisely says the community support helped her family following the funeral.

"For me, talking about Scott with people who knew and loved him helps a lot," Nisley said, "even people who met him once, but remembered him. The stories we share are poignant and hilarious, and I can’t get enough of them. The Nisely family was presented with a copy of the legislation signed by President Bush.

A plaque will be permanently mounted in Nisely’s honor in the lobby of the Marshalltown Post Office along with a monument stone located outside the building alongside the flag pole. Geri Nisely announced that Justin has enlisted in the Army within the last week, and will be going to basic training after the first of the year.