You are here: Home / Politics / Govt / Jefferson asking for $660,000 from state for downtown project 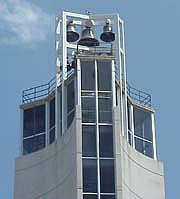 A town in west central Iowa, possibly best known for it’s annual Bell Tower Festival, is asking for a $660,000 grant from the Vision Iowa Program.

Todd Madson, the mayor of Jefferson , says the money would be part of a $2.45 million dollar make-over of the town square.

The plan calls for all new sidewalks, benches, signage, lighting, and plantings. “Basically just a rejuvenation of the downtown,” Madson says. The project has been in the works for over two years, but Madson and other community leaders made their pitch before the Vision Iowa Board on Wednesday.

Backers of the project for the Greene County seat are hoping to collect around $225,000 in private donations. “We’ve raised probably $160,00 of that so far,” Madson says, “without really asking the whole community.” The Jefferson City Council is pledging around $400,000 for the project, while the Greene County Board of Supervisors has pledged $225,000. A small, but vocal group of local taxpayers have been fighting the plan.

“We have some opposition obviously,” Madson says, “but I think the majority of the people want to see the revitalization of the downtown done.” Nearly 10,000 people visit Jefferson every year during the second weekend in June for the annual Bell Tower Festival.

A 168 foot tall bell tower is located just outside the 90 year old Greene County Courthouse in Jefferson’s town square. Madson says he hopes the downtown project will eventually boost Jefferson’s population, which currently stands at just over 4,600. “We really feel that the downtown revitalization project is a way of showing off our town to invited guests and people that are looking to relocate to Jefferson,” Madson said after his presentation before the Vision Iowa Board.

The board will review the grant request and could issue a decision on the matter at it’s next meeting on December 12th.