You are here: Home / News / Governor and family deliver Thanksgiving dinner to shelters 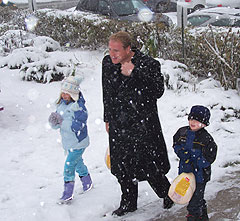 The Culvers brought along their two children as they made their final stop at the New Directions Women’s Shelter that’s four blocks west of the governor’s mansion.

“As we prepare to gather for Thanksgiving I think it’s important to remember the less fortunate and to spend a little time to focus on the needs of those Iowans across the state who could use a little help,” Culver says.

The governor says they brought along their daughter Claire and son John on the last stop to “educate them about the fact that there are a lot of people in need.”

Son John helped his dad carry one of two turkeys into the shelter, as the First Lady brought along a box with stuffing, potatoes, and other trimmings for a Thanksgiving dinner. Culver says every shelter they’ve been too has been at capacity or near capacity so they can use a little help, “So I’m certainly urging all Iowans to maybe donate to their local shelter or services organization, families are in need out there.” 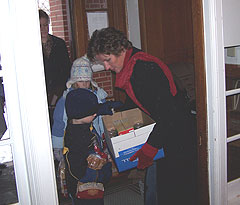 The governor says visiting the shelters gave him a little more knowledge on the issues facing shelters. Culver says he learned that 60-percent of the homeless people in the state of Iowa are families headed by a single parent with kids. Culver says that’s the case at the New Directions shelter, as he says it’s a family shelter and in the last two months they’ve turned away 50 to 60 families a month.

Culver says the state has to do all it can to take care of those in crisis. Culver says the shelter gets about $15,000 for its $300,000 budget from the state, and legislature should look at what it can do to get more money in the next sessions for those in need across the state.

The turkeys delivered by the Culvers were donated by the Iowa turkey federation.