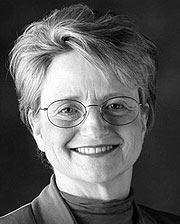 An expert on global pandemics speaks at Drake University today about illnesses centuries ago that wiped out millions of people and the lessons today’s leaders still haven’t learned from past deadly mistakes. Dr. Mary Gilchrist, former director of the University of Iowa Hygienic Laboratory, says the flu pandemic of 1918 was handled differently in several U.S. cities with fatal consequences.

“One city, St. Louis, did the right thing and escaped with a much smaller mortality rate than Philadelphia which, their leaders fiddled around and didn’t enact the right kinds of policies to prevent the spread of the disease,” Gilchrist says. She says personalities, politics and economics can all come into conflict and cost lives. The 1918 influenza pandemic killed between 50 and 100-million people worldwide. It may have eclipsed even the Black Death or Black Plague of the 1340s, which killed perhaps 75-million, in a disease spread by fleas on rats.

Gilchrist, who is now director of the Massachusetts State Laboratory Institute, says today’s leaders need to be prepared for another global health threat. She says: “What I’m going to be advocating is that we make sure we do the right thing looking into the future because we have a lot of challenges out there. We have the possibility of new infectious diseases coming along with global climate change, for example, and we will get some surprises, as we did with SARS.”

Even in the new millennium, leaders in modern Canadian cities like Toronto and Vancouver took very different approaches to tackling SARS in 2003 with much different results. Gilchrist says there will certainly be more world-threatening illnesses. She says the pandemic of influenza is the biggest known threat as there have been at least three in the past four centuries.

Those flu pandemics that hit in 1957 and 1968 were relatively mild, at least when compared to the devastation of 1918. Gilchrist has testified four times before Congressional committees on bioterrorism response, antibiotic resistance and emerging infections. Gilchrist says no one, of course, knows when the next pandemic will strike, or whether it’ll be an affliction like monkeypox, bird flu, SARS or something completely new. She says her primary concern is another flu pandemic, especially given the nature of our global economy.

“If we have a vaccine, which we probably won’t have, for everybody in the United States, we still won’t be taken care of because our drugs are manufactured offshore,” she says, “many of our other goods are manufactured offshore. It’s likely that we will have very many challenges no matter whether we can protect ourselves or not.” Gilchrist’s talk is entitled “Plagues and Pandemics: From the Black Death in the Middle Ages to Bird Flu in the Age of Science.”

The lecture is free and open to the public and will start at 12:30 P.M. at Drake University’s Olmsted Center.