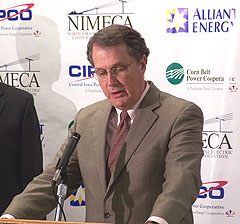 Thomas Aller is the president of Alliant subsidiary Iowa Power and Light, which is proposing the plant known as the Sutherland Generating Station. Aller says the station will provide benefits for Iowans for a long period of time, providing jobs, provide economic development infrastructure to grow the state, renewable energy to support growth, and environmental benefits as it will he a hybrid generating facility.

The plant will burn switch grass and corn stalks along with the coal to help produce the electricity.  Aller says it will provide some electricity to 94 of Iowa’s 99 counties.

The state consumer advocate, and environmental groups, are opposing the new plant — saying cleaner alternatives should be used to create the energy. Aller says Alliant and its partners stand by the proposal they’re presenting to the Iowa Utilities Board.

Aller says, “The partners standing at that table, are the only ones, are the only ones in this room, in this building, in this state, who have an obligation to keep the power on. And so that’s our job. We take it very seriously. And we’re proud of the proposal we’ve thought through here, I think it addresses all of the issues that are relevant in our society today.”

Aller was asked why they aren’t spending the one-billion dollars proposed for this plant to build more wind power. Aller says the challenge for people in his position is to match “aspiration with reality.” “The simple answer is we’re going to continue to build wind. We’re going to continue to do energy conservation, but it is not enough, it will not meet the baseload needs of Iowans,” Aller says, “and I know that is not the answer people want to hear.”

Aller says the companies must first keep the power on with a continued rising demand. Aller says they could take the same billion dollars on wind and still be standing there talking about a new coal plant because the wind would “note meet the baseline need of Iowans.” Aller says the coal plants operate 24-seven, while the wind plants are at best 35 to 37-percent efficient. He says that means two-thirds of the time you don’t have a dependable power source.

Ken Kuyper is the general manager of the Corn Belt Power Cooperative headquartered in Humboldt, which will get some of the energy from the new plant. Kuyper says the demand continues to increase from Cornbelt customers. Kuyper says much of the increased demand is due to the addition of biodiesel and ethanol plants to the line.

Dennis Murdock is the CEO of the Central Iowa Power Cooperative in Cedar Rapids, which serves 58 of Iowa’s 99 counties. Murdock says about 97% of the company’s power is supplied in-state, but he says they have “an aging fleet,” and the new plant provides a great opportunity to replace some of the older electric sources. The North Iowa Municipal Electric Cooperative Association in Humboldt is also part of the agreements. The Iowa Utilities Board will hold public hearings on the proposed new plant starting January 14th in Marshalltown.