You are here: Home / Human Interest / Astronaut finds some pains in returning to Earth 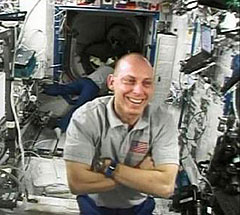 The first Iowa State University graduate to reach orbit is back on Earth after a five-month assignment aboard the International Space Station.

Astronaut Clay Anderson says he was surprised by one thing in particular — coming back from a lengthy stay in a weightless environment can literally be a pain in the butt.

Well, the biggest surprise is that my bottom really hurts. I didn’t use my rear end for about five months," Anderson says,"and when I first came back to Earth and people made me stand up and sit down on hard chairs, I figured out that my tailbone and my posterior were not doing all that well. But that’s getting better every day."

Anderson is an Ashland, Nebraska, native. If asked what he’s up to, Anderson says he’s down to about six-feet tall again. With no gravity to compress his spine, he grew an inch-and-a-half during his stay on the space station. Anderson says he shot some great pictures from space, and not just of the Great Wall of China.

Anderson says: "That one’s been captured in film, but I captured the Pyramids of Egypt. Yeah, that was a pretty cool day. I also captured Memorial Stadium when it was full of Huskers wearing red when they played the Aggies A & M." During his five-month stay in orbit, Anderson performed a host of science experiments, including growing the herb basil. Turns out, if you over-water in zero gravity, the water doesn’t drain down from the roots and they rot. But Anderson says the job had its up moments, as well.

Anderson says: "I go outside the vehicle in outer space and I’m only hanging on by a braided wire and a couple of extra tethers, and I can turn around and flip around and look at earth at any time, and one of the first things I saw was the moon rise over the horizon, and it’s just a spectacular feeling to be floating so unencumbered in Outer Space in such a dangerous yet such a beautiful environment."

Anderson’s back home in Texas, undergoing rehabilitation for the loss of bone and muscle that happens when you spend time in space. He says he never realized how much he’d miss standing in the backyard, smelling things in the breeze. He’s glad to get back to that, and plans to visit his native Nebraska either over Christmas or next February.