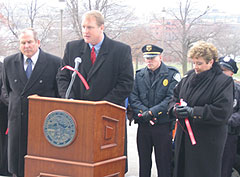 Iowa Governor Chet Culver attached a red ribbon to his vehicle’s antenna and several law enforcement officers did the same to their squad cars during a ceremony outside the statehouse Tuesday.

The ribbons are designed to raise awareness about the dangers of drunk driving. Culver signed a proclamation declaring December as "Drunk and Drugged Driving Prevention Month."

Culver says, on average, one Iowan is killed every three days in a traffic accident because of an impaired driver. Michelle Coles of Des Moines is with the organization Mothers Against Drunk Driving. Her only brother was 24 year old when he was killed 16 years ago in a traffic collision in Marshalltown. The person responsible for the crash was driving drunk and without a license.

"I’m not angry…but, yes I am angry," Coles told Radio Iowa. "I’m upset with people that just don’t have the sense to stop and think about what (drunk driving) does to other people. It’s just inconsiderate I guess for people to think they can drink and drive." Iowa Public Safety Director Eugene Meyer says more than 50 people are charged with OWI everyday in the state.

Meyer says law enforcement officers made an estimated 20,000 OWI arrests in 2006. "What concerns me terrifically is we all know that’s just the tip of the iceberg," Meyer says, "we have many more people operating vehicles on Iowa’s roadways under the influence." Officials say the Christmas and New Year’s holiday period is one of the more dangerous times of the year related to drunk driving. Last December and January, nearly 2,800 Americans were killed in alcohol-related crashes.